Hi! I am eight years old here and am balding. 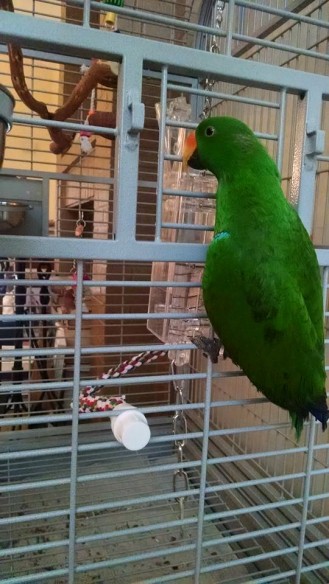 His longer feathers hid it pretty well, but little dude was BALD behind them.

You can see some of the damage here. Also, no more almonds. MAYBE an occasional sliver.
It’s been five years since Louie’s “gotcha!” day — in that time, I’ve seen him go through several mojo moults. The early ones were rather horrific; when we got him, there was a patch of his head so bald that the vet thought he must have scratched it off on the cement perch in his cage and worried that it may never grow back. He’d been previously fed a steady diet of cheese, peanuts, french fries, and general other things not super advised for eclectus parrots due to their special digestive tracks.

Little did I know that was actually the start of Louie’s seasonal series of mojo moults. His worst one was in October of 2016; not only did he have the wrap-around feather loss to the back of his head, but he also had so many pin feathers on his nose that it was really disgusting (not to mention uncomfortable for him: 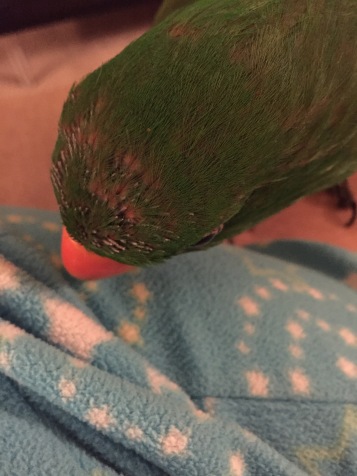 He was not an attractive bird.
He’s been with me for over five years, and they always vary in their intensity!

Take a look at the evolution of his mojo moults throughout the years:

So. Bald. This picture didn’t do it justice. 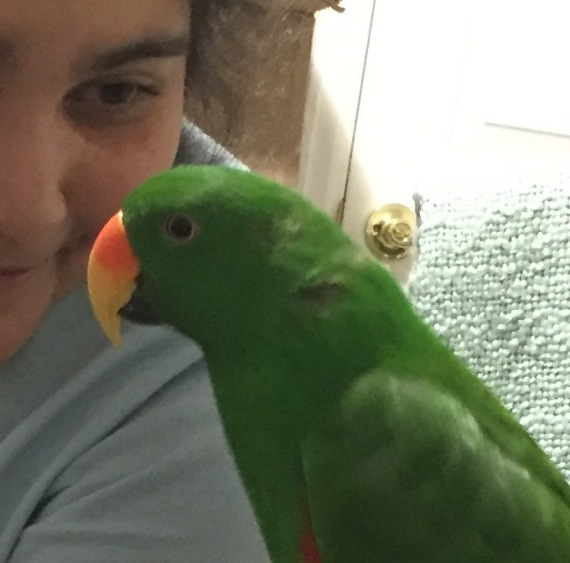 Mojo Moult, 2018–the worst it got. He looked SO much better!

August 2019 — This is the worst it got. He had a little divet (picture makes it look worse than it is), but it was much better than in previous years.

October 2019–The year of too many nutriberries.

2020: Louie is starting his annual mojo moult this year! (He’s eating a bit of whole-grain toast, not nuts.)

July 31st, 2020 — his first yolk this year due to hurricane treats.
Granted, this is early in the process. I’m going to endeavor to take a photo a day of his moult this time–we’ll see how it goes!

Mojo moults aren’t the end of the world and shouldn’t alarm you too terribly if you own an eclectus!